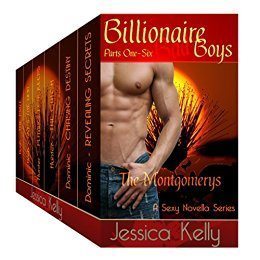 
When you're a Montgomery, the sex is hotter, the stakes are higher, and the money never runs out…

Dominic, Hunter, and Nash Montgomery aren't just heirs to the biggest oil fortune in Texas. One's a world-famous model, while the other two are superstar athletes who score just as much on the field as they do off of it.

In Billionaire Bad Boys - The Montgomerys (Books 1-6), you'll go on wild rides with all three of these hot guys over the span of six books. It all adds up to more than 800 pages of steamy sex, dangerous secrets, and hot suspense!

First, you'll travel to the Caribbean, where Dominic gets caught up in a sexy mystery that gets a whole lot wilder than he ever could have imagined -- with a woman he never expected to meet.

Then, you'll hit the baseball diamond with Hunter as he learns all about the other side of superstardom -- where trust gets broken, where sex is never just sex, and where the secrets come with much higher stakes.

After that, you'll ride along with Nash as he prepares to become football's biggest superstar. The problem? His money and talent have made him a target for some very dangerous people. The only one who can help him is a woman who's just as sexy as she is smart.